San Francisco’s Financial District sits atop what was once Yerba Buena Cove. After the Gold Rush of 1849, the harbor was choked with abandoned ships that had carried people from around the world to the city. Rapid development followed, and the shallow cove was filled in and built up. An estimated 70 ships are buried under these skyscrapers.

As rising seas and demands for fresh water threaten San Francisco-area shorelines, the focus is on building tidal marsh.

via How the Bay Area Is Restoring Nature’s Delicate Balance

There is a beauty in the way the whole natural system fits together, keyed to times and tides, seasons and cycles. The millions of us clustered around the bay may not know we owe the sweet scent of the wind, the call of the birds, and the platefuls of local salmon and crab to this elegant connectedness.

The gleaming metropolis of San Francisco towers on the edge of the largest estuary on North America’s Pacific Coast. A signature vermillion bridge, as famous as Big Ben and the Eiffel Tower, marks the ocean’s mighty sweep through the Golden Gate to form the bay. Its configuration illustrates the very character of an estuary: A partly enclosed coastal body of brackish water, fed by a river, open to the ocean’s rhythmic tides. The mix of fresh and salt water is symbiotic, and particularly dramatic here. Over time, the upheaval and subsidence of the Earth’s crust created a cavity between the coastal San Andreas Fault and the inland Hayward Fault. The invading ocean encountered the force of the two rivers, the San Joaquin and the Sacramento, fed by the melting snows of the Sierra Nevada. And San Francisco Bay was born. 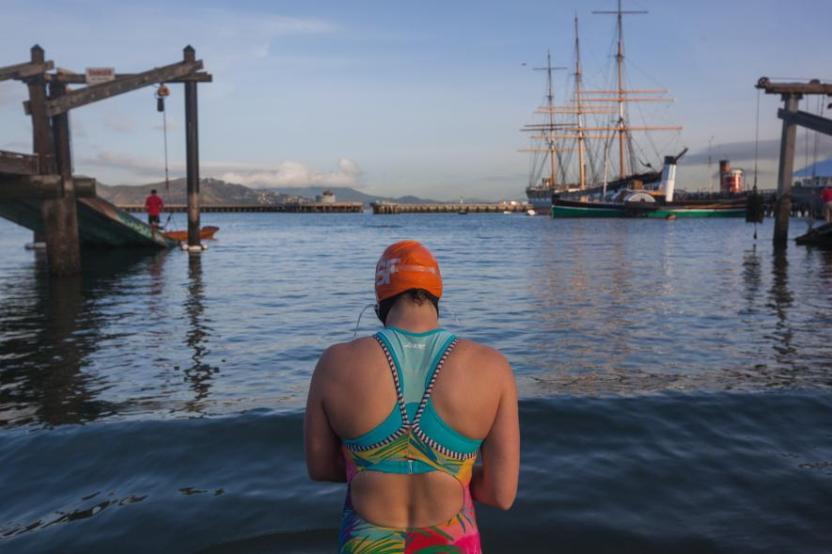 A member of the Dolphin Club goes for an early morning swim in the San Francisco Bay. The water quality in the bay has increased significantly in the last 50 years making recreational swimming in the bay more feasible. This was the result of the Save the Bay movement started in the 1960s